While transatlantic relations are at quite possibly the worst they've been since the 1940s, they could already be poised for a comeback.

Much has been written about Donald Trump's ability to divide, but a side-effect of the societal 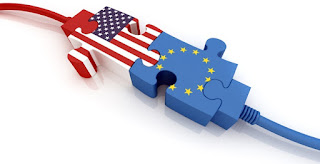 fracturing this can cause is that people become closer together once they're unified by a single threat or cause.

Realistically, the Trump administration is doomed.

Forget about potential impeachment, legislative accomplishments, polls, etc. for a moment and ask yourself this: Is there any way Donald Trump wins re-election in 2020?

The best case is Trump rebounds and either narrowly wins election in a fluke or, more realistically, manages to not be removed from office and either steps down or loses his bid for re-election in 2020.

The worst case for Trump is removal from office in disgrace and sooner rather than later.

Either way, the US will be left with a member of the foreign policy establishment as president, either a Democrat, Mike Pence, or a generic Republican. In either case, the administration will be run by someone who believes in the importance of the alliance between America and Europe that he or she will make it a priority to repair it, both for practical reasons and because it will be an easy win.

Meanwhile, Europe is already seeing a backlash to Russian meddling and Trump-esque populism, a trend that is almost certain to continue in the United States. Even if Republican voters continue to seek out leaders similar to Trump, the backlash from Democrats and independents will make it almost impossible for their candidate to be too tough on Russia and too pro-Europe.

Every action has a reaction. While European leaders are right to be troubled by the direction American leadership has taken, there are simply too many forces - cultural, economic, historical, even social - pushing the two regions together for any fracturing to last longer than the current administration.